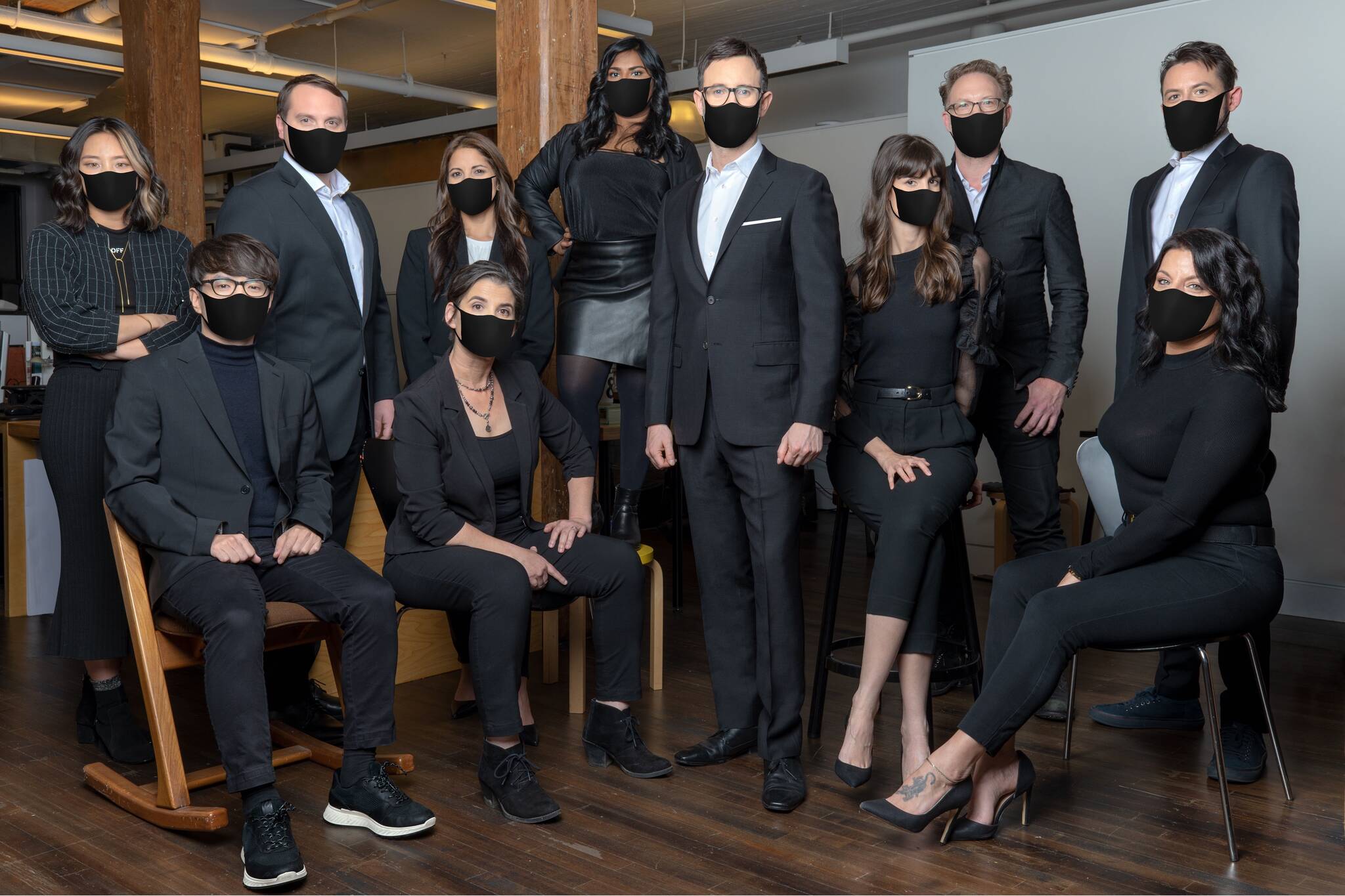 Danny Forster & Architecture is a consortium of architects, designers, urbanists, filmmakers, storytellers, technologists, curators, professors, and authors who value the challenge of innovation over the security of repetition.

This guiding principle has spurred DF&A to produce a series of boundary-pushing projects, from a tower at the World Trade Center to the world’s tallest modular hotel, from a five-star resort on the island of Nevis to a floating hotel overlooking the Hudson River. From a Museum of Ethnography in Budapest to an environmental center in the Seychelles. From Taylor Swift’s Manhattan home to the interior of every Aloft Hotel in the world.

Because DF&A is an architecture firm with the assets of a production company that does interior design and branding–because, in other words, it has the capacity to produce both a hotel tower and a TV show–it approaches each project with a sense of limitless possibility. Along with the typical tools of the architectural trade, it has video, VR, animation, custom furniture design at its fingertips. With access to such resources and resourcefulness, the firm can begin by asking what’s the best this can possibly be? and then invent the process to take it there.

DF&A’s clients understand that they will get more than they ask for when they hire DF&A. More ambition, more innovation, more effort, more interaction with the firm and with the creative community that surrounds it. They will get the answers to some questions they didn’t know to ask, and solutions to problems they didn’t see. And they will get, at the end of the process, a building that goes far beyond their expectations.

Architect. TV host. Producer. Director. Speaker. Professor. Danny Forster is all these things, and through them all he has become a global advocate for architecture. The field of architecture may not appear to need much help: buildings surround us. But that very ubiquity has made it almost invisible; we move in and around buildings but barely notice them. Through his persistent and passionate advocacy, Danny gets people to notice, understand, and value the built environment.

This quest began when Danny was hired, while still pursuing his master’s in architecture at Harvard’s Graduate School of Design, to host a television show about impressive feats of construction and engineering. The show would become Build It Bigger, one of Discovery Channel’s most popular series, and run for nine seasons, during which Danny traveled to more than fifty countries, exploring everything from record-breaking skyscrapers to cutting-edge sports stadiums, from airports to tunnels to impossibly long bridges. Besides offering a matchless education for an aspiring architect, Build It Bigger taught Danny how to talk about architecture so an audience wouldn’t just understand how and why a building was designed a certain way, it would care. The key was inviting them inside the process–not just saying what’s important, but showing them in concrete and engaging ways.

In 2010, Danny conceived and co-produced with Steven Spielberg a six-part documentary on the aftermath of 9/11: Rising: Rebuilding Ground Zero. The Emmy-award-winning series brought viewers behind the scenes of the massive building project and helped them wrestle with its historic and emotional significance. As a New Yorker, Danny was grateful to be able to respond to the seismic event he and his city had experienced. And he was honored that his firm, Danny Forster & Architecture, was chosen to design a tower adjacent to the World Trade Center campus.

In approaching that project, Danny brought with him the ambition and sense of unlimited possibility created by years of exploring the most incredible architecture on earth. His frame of reference was simple: greatness at the global level. To him, that’s what architecture was, and is.

If your frame of reference is that wide, even building codes and zoning laws seem more like challenges than like limits. His only inflexible rule is to build something that both meets and transcends its program, contributing to the life of its city and to the discipline of architecture.

The resulting, award-winning tower catapulted him and his firm into an era of high-octane productivity that saw Danny designing towers at Hudson Yards and Columbus Circle in New York, master plans in Charlotte and Dallas, a five-star resort on the island of Nevis, and the tallest modular hotel in the world. He brings to each project that original sense of limitlessness–as well as with the energy, intensity, and engagement that viewers responded to in his Build It Bigger days. The man hanging off the side of a skyscraper in Kuwait, gesticulating about the wonders of architecture, is the man clients encounter in conference rooms and on construction sites, working with them to make their buildings better than they thought possible.

Danny also continues to find ways to promote architectural literacy–to teach people how to read a building, not just look at it. He teaches graduate architecture courses at Harvard and Syracuse, as well, and he is happy to keynote professional conferences, but he is particularly driven to speak on behalf of his profession rather than to it. He speaks all over the world, from the TED stage to the fourth-grade classroom, and produces and hosts TV projects about architecture and culture. How China Works I & II dive deep into the Chinese building boom and subsequent social upheaval; Prefab Nation explores the growing modular building trend; PBS’s Revolutions investigates inventions that transformed worlds.

Sometimes that involves disrupting the traditional way of doing business. In several of its more recent projects, DF&A has embraced modular construction as a way to merge deep functionality with beauty and import. The firm’s modular tower in Manhattan is a perfect example of why this underutilized building technique should command the respect of the industry and the public. Since investigating post-Katrina houses a decade ago, Danny has been a committed proponent for modular construction; as an advocate he hopes to get people to discard their preconceived notions of pre-fab and see the potential of modular. But as an architect, he’s aware that, ultimately, it’s his buildings that will do the talking.

Jason has a soft spot for industrial design, the process of fabrication and systemization; as a student he almost went the route of naval architecture. He specializes in modular building, which pushes traditional architectural design into the world of the factory.

“Modular is inherently design-build. Everything is so tightly integrated that you have to work with builders or it doesn’t work.”

As Lead Designer, Jennifer creates rich, immersive spaces. For her, architecture, interiors, and brand identity all involve evoking a strong and specific emotion in people. She finds it particularly rewarding to create the emotionally heightened spaces of hotels, whose guests are seeking a transportive moment.

“Travel is a departure from everyday life,” says Jennifer, “so a great guest experience includes an element of escapism.”

There are two different ways of designing a building, says Jong: big to little or little to big. He prefers the latter, starting with the small unit and extrapolating out to the larger building. The larger the better, in fact: Jong excels at skyscraper design. But whatever the architectural task or medium–drawing, model making, coding–Jong delivers.

With his experience working construction as well as doing construction budgeting and management, Jong has mastered every facet of the building process, and still relishes “How everything comes together in real life.”

Kate’s work with DF&A ranges from strategy–in which she uses her logical powers to shape the firm’s approach to a project–to translation–in which she turns into words a story the firm has “written” as sketches, CAD files, and renderings. But first she has to understand the story herself.

“I can’t read a blueprint,” she laughs. “I have to be led through like a child.” Like a child, she asks a lot of questions, and that clarifies things both for her and the designers. When it makes sense to her, she can then describe it, explain it, promote it, and even name it–whatever the firm needs.

Jackie believes her job description is simple: “To improve people’s lives.” As an interior designer with DF&A, she helps make the spatial and material decisions that will affect the lived experience of office workers, residents, museum-goers, hotel guests, and more.

Since that experience begins with the architecture, Jackie sees herself as uniquely fortunate to be able “stack on top” of her interior design education a practical education in architectural design.

Waverly did her early work in finance in the film industry; as DF&A’s Chief Financial Officer she continues to enjoy the challenges and rewards of guiding a creative organization. “My passion is helping a company I believe in realize its vision.”

Beyond the day-to-day money management, that means doing cost analyses, developing growth strategies, and, above all, planning. “My job is to think 12 steps down the road, so my colleagues can just think about the project in front of them.”

Jeff is an architect and an expert on modular construction; he’s led a range of high-profile modular projects, from disaster housing to hotel towers. Modular construction appeals to his love of detail work, he says, since “all the details come together” early in the prefabrication process, which requires “particularly refined design.”

When Jeff was a student at Syracuse University School of Architecture, Danny Forster was one of his professors; Jeff later worked for DF&A as an intern years before joining the firm full time. “I think a part of me has always wanted to come back and work for Danny again.”

Yashil is an architectural designer and BIM specialist with an abiding interest in innovation. Whether it’s material or technological, she’s always looking for new things or new ways of using old things–from green roofs to adaptive reuse–to push the industry forward into a more sustainable future.

Her interest in sustainability extends to her life outside the office. She grew up in Mumbai and now lives in Brooklyn, but her hobbies include the retro-progressive eco-friendly techniques of composting, urban farming, and even beekeeping.

Micah is an architectural designer with a penchant for both physical and virtual modeling, and a passion for architectural education. He’s particularly fascinated with prefabricated design and construction and contributes to all of DF&A’s high-profile modular projects.

Micah shares his expertise and his enthusiasm not just with clients and colleagues, but with students as well. He’s an award-winning researcher as well as a professor determined to give his students (most recently at   New York Institute of Technology) “a foundation for the endless pursuit of architectural knowledge.”

Alexandra Hartford loves creating order; her original degree was in organizing the outdoors, a.k.a. landscape architecture. At DF&A she contributes her graphic design and office management skills to everything from website maintenance to design proposals to social media.

Alex is “crazy about art”; outside the office, she is a painter and illustrator who’s been commissioned for portraits, product labels, and more. Her favorite outing in her free time? Museums.

Stories about our work and purpose